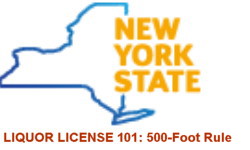 Several sections of the New York State Alcoholic Beverage Control Law (ABCL) regulate the number of licenses that can be granted in close proximity to each other. Taken together and along with relevant court opinions, these provisions collectively are known as the “500-foot rule.”

There are so many misconceptions about what the rule says and what it means. Even lawyers and non-attorney colleagues who do what I do regularly to ask if a location is subject to the rule and whether they can navigate around it.

In plain terms, the rule mandates that the New York State Liquor Authority determines, after holding a hearing, whether good reasons exist to grant a new full liquor license when there are already three or more full liquor licenses within 500 feet of a proposed premise. The rule only applies to on-premise purveyors of distilled spirits (bars, restaurants, hotels, catering halls, vessels, etc.). It does not apply, however, to premises located in villages, towns, and cities with populations under 20,000. It also does not apply to wine/beer/cider or beer-only applicants.

The statute doesn’t use the phrase “good reasons.” Instead, it requires that 500-foot rule applicants demonstrate that they would operate their establishments in a way that would further “public interest” and that “public convenience and advantage” would be met by issuance of the license. So what does that mean? The legislature provided guidance within the law.

“The authority may consider any or all of the following in determining whether public convenience, advantage, and the public interest will be promoted by the granting of licenses and permits for the sale of alcoholic beverages at a particular unlicensed location:

a) The number classes and character of licenses in proximity to the location and in the particular municipality or subdivision thereof;

b) Evidence that all necessary licenses and permits have been obtained from the state and all other governing bodies;

c) Effective of the grant of the license on vehicular traffic and parking in proximity to the location;

d) The existing noise level at the location and an increase in noise level that would be generated by the proposed premises;

e) The history of liquor violations and reported criminal activity at the proposed premises;

f) Any other factors specified by law or regulation that are relevant to determine the public convenience, advantage, and public interest of the community.”

THE application and hearing

There are four (and potentially five) players or groups involved in “500-foot rule” determinations:

2) Your municipality or New York City community board,

3) An administrative law judge, or ALJ, employed by the authority,

5) The members of the NYS Liquor Authority, who are appointed by the governor.

As the applicant, you are required to tell the authority whether the rule is triggered in your application. You must also provide a list of all full liquor licenses for bars, restaurants, etc within a 500-foot radius of your premises. The NYS Liquor Authority Mapping Project (LAMP) will generate a PDF with this information if you plug in your full address in the tool.

If the rule is triggered, you will also be required to submit a public interest statement with your application. Generally, this is a list of reasons that you believe that granting a license would be in the public interest. If you choose not to attend the 500-foot hearing, the ALJ assigned to your application will put your statement into the record.

Within a few weeks, he or she will issue a recommendation (for or against) to the licensing board based on your statement, as well as the parts of the application where you describe how you will operate and how you will supervise the establishment.

Up until about a year ago, my submissions were pretty general, if not cursory. That was because I almost never ran into community objections that I could not resolve with a stipulation concerning hours of operation, music, outdoor areas, whatever bee was in the municipality’s bonnet.

But, then the SLA started emailing copies of ALJ findings after hearings to representatives of applicants like me. It became clear that ALJs were no longer rubber-stamping 500-foot rule cases. In fact, some narratives were quite critical – even when the ALJ concluded that there might be good reasons to grant the license.

I overcame the critical comments with a 2nd submission directly to the licensing board addressing the points or concerns raised by the ALJ. But as a result of that experience, I now spend a lot more time on these public interest statements and encourage applicants to retain me or qualified associates to attend the 500-foot hearing with them.

Although an actual appearance is not required, I strongly recommend that applicants attend with representation when possible to answer any questions the ALJ might have that are not addressed in the written submission. In case you are wondering, I charge $1,000 for this hearing and pre-hearing submission (most NYC attorneys charge $2,000). If you come out of this hearing in good shape, you will get the license. I cannot stress how important this hearing is to the success of your application.

In most cases, a positive recommendation from the ALJ will result in approval by the licensing board. However, if the ALJ issues a negative recommendation, the Licensing Board typically will refer the application to the three-member board appointed by the governor to oversee the agency. The members of the authority are sometimes referred to as the full board.

If you have ANY matter that goes to the full board for any reason, you should consider getting me or a qualified colleague to submit points in writing beforehand and then appear before the board to make your best case.

I have mentioned four of the five usual players in the 500-foot rule process, and what role each plays. I glossed over another key player, however: the New York City community boards.

Outside of New York City, the authority issues notices of 500-foot hearings to the clerks of each village, town, or city where the applicant’s premises will be located. New York City designates community boards comprised of citizens to provide input on SLA applications.

The 500-foot rule requires the authority to give a certain amount of deference to a municipality’s position in 500-foot rule cases. In New York City, in particular, this poses a hurdle that applicants must overcome. Community boards in New York City routinely oppose new on-premise liquor applications in locations that were not previously licensed for full liquor.

In many cases, a board may ask an applicant to agree to close by 1 a.m. or even earlier on certain days of the week in exchange for a positive recommendation. Anything you agree to with a community board will become a restriction on your liquor license, so give careful thought to proposed stipulations.

If you cannot, or will not, agree to restrictions on how you operate with the community board, your matter will almost certainly end up before the SLA full board for a final determination.

At this hearing, the board typically reminds applicants that the members are required by law to give deference to the community boards in 500-foot rule cases. But if you are a restaurant or bar in a location that was previously licensed and wasn’t problematic, the board tends to issue Solomon-like decisions that you can live with. For example, if you wanted to stay open until 3 a.m. on weekends on the Lower East Side and the board was pushing for 1 a.m., the members might give you 2 a.m. and tell you to come back in a year and ask for modification. If the noise was a problem for the community board, the Members might tell you that you can have the license but with no live music, dancing or DJ.

The members seem to have little patience for community boards that will not recommend approval for any new full liquor license. Community boards cannot declare moratoriums on new licenses; only the members of the authority can, which they have been reluctant to do. Instead, they rely on the public interest standards in the law that I described earlier (history of the location, noise, parking, etc.).

If you get disapproved by the licensing board or the full board for any reason, you can reach me by phone at (631) 331-3334 or email me at john@nybarguy.com. In some cases, I can get the agency to reconsider the determination. In other cases, you may have to rethink your method of operation and reapply. In limited circumstances, I can refer you to an attorney for a possible court challenge to a final determination.

For example, if the agency did not follow ABCL or made a decision that was arbitrary and not based on the record, that might be grounds for a judge to give you a do-over with the SLA. In disciplinary matters, judges sometimes throw out penalties against licensees that are not based on substantial evidence or are on their face “shocking” to a reasonable person.

1. The 500-foot rule only applies to on-premise liquor license applicants (i.e. establishments that want to serve hard liquor or spirits for on-premise consumption).

2. The rule does not apply to wine/beer/cider-only applicants.

3. The rule does not apply to liquor stores, grocery stores, manufacturers or wholesalers.

4. The rule is only triggered in villages, towns, and cities with populations in excess of 20,000 persons.

5. Despite the rule, getting a license approved is typically not a problem if you face no opposition or have community support and/or stipulations.

6. Never appear before community board, 500-foot hearing, judge, or the members of the authority alone. Hire me.

Class resumes on 6/29 with a primer on the 200-foot rule. Bookmark this and our , which is updated daily.

John Springer is not an attorney and does not dispense legal advice or represent clients before any “court of record,” as defined in state law. The state does, however, permit qualified non-attorney representatives to assist clients before administrative agencies, including license applications and administrative adjudicatory hearings. If you are summoned to appear in a court of law or suspect you may be, you should consult a duly admitted attorney at law.